The Perilous Escape of Straggler Lemming
And Other Near Depth Experiences 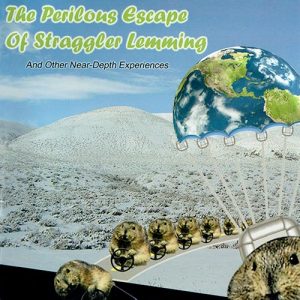 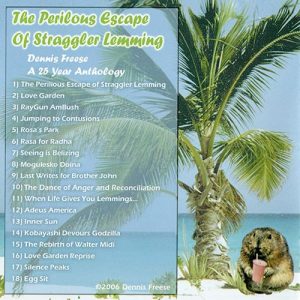 You don’t have to be a lemming to leap into this adventure,rather you might want to fasten your seatbelt and prepare yourself for a flight of fantasy.

As a child growing up in the shadows of General Motors assembly plants in Flint, Michigan, I nearly came to believe that every cloud in the sky was the result of some giant smokestack emanation. The lightning from those clouds was surely first emitted from the frame welder’s torch, and thunder came from the metal stamping plant. How to break from the orbit of such an all-consuming course, on which the whole town’s (if not the world’s) fortune revolved? Well, fortunately there was a counterbalance out of Detroit, called Motown. This, along with musical voices of awakening from England and California, and powerful surges of spirit from many of the jazz greats of the day, was the influence that began to shape a young woodwind musician named Dennis Freese, in the 1960’s.

A move west to San Francisco in the early 70’s introduced me to a wide variety of playing and recording experiences: Working with the 12-string guitar wizard Clark Palmer, and latin music influences such as the great Salvadoran composer and guitarist Sal Laroche, as well
as the band, Tuza (whose members later went on to work with John Lee Hooker). Jazz composer James Norton was another powerful influence, writing challenging arrangements and playing woodwinds with amazing skill. Luckily, recordings were made with each of these individuals and groups during that period, because by the early 80’s, I was a family man, ready for a quieter life. In 1983, my wife Uma and our three children and I relocated to Ashland, Oregon.

Surprisingly, Southern Oregon also turned out to be fertile ground for musical confluence: Working with the Oregon Shakespeare Festival in various musical capacities, studying and performing Eastern European Klezmer music with composer and director Barbara Damashek. I also composed and recorded a great variety of songs, with the help of some hugely talented local musicians, including drummer Tom Freeman, who engineered many of these recordings, and acted as producer of this project. David Hislop also deserves much thanks for recording help and retrofitting some of the earlier recordings, as well as being a co-conspirator on the Walter Midi spontaneity.

All and all, it is rather a wonder to me that this extensive musical enterprise could finally be pulled together under one roof. An even greater surprise was finding that, beyond the diversity of musical styles represented in these recordings over the decades, there remains a continuity, something like the string that holds the beads of a necklace. To me, this represents the spirit of all those who contributed to this work. May you, in turn, find in the listening, a worthwhile adventure just short of perilous!

Melvin was born in 1954. His mom played the piano but she was so busy raising kids it was only occasionally she sat down to play a sonata. His dad whistled incessantly but couldn’t carry a tune. This was the musical environment that Melvin grew up in. Then in 1964 The Beatles show up on Ed Sullivan. His dad asked him, “did you like that?” and he said “YEAH”! In 1966 Melvin listened to Frank Zappa’s first album “Freak Out” and he hasn’t been the same since. Melvin is fifty one years old now. His three hundred plus LP collection sits in his living room gathering dust, no turn table in sight. Melvin loves music but he’s lazy. He turns on the radio and what he hears is someone else’s idea of P.A.P. (popular audio product). No surprises there. One day while singing tunes to himself (Melvin’s usual way of listening to music ) there was a knock at his door. The musical artist Dennis Freese was there to give him his “BRAND NEW ALBUM”, ( on cd not vinyl ). “It’s called?” ask Melvin. “The Perilous Escape of Straggler Lemming” responded Mr. Freese. Interesting thought Melvin, “do you have any advice for me Dennis?” “Yes, listen to the whole thing in one sitting”. This advice was right up Melvin’s alley. He recalled those days of his youth when he’d put on a Santana album and listened to it front and back. Then having not gotten his fill would put another Santana album and listen to that one too. Melvin didn’t just put it on and go about his business, (eating, bathing, cleaning house or talking on the phone ) NO!, he would sit down in front of his speakers and pay attention to every detail in the performance of the music that his ears and mind were capable of discerning. He noticed the touch of the drummer’s stick on the hi-hat cymbals, the drummer’s bass drum playing with the lines unfolding on the bass guitar, the rhythm of the guitar meshing with the bass and drums, the horn section harmonizing with the rhythm section and pushing the tune with texture, rhythm and power. He’d listen to the vocalist and notice the timbre and emotion being expressed. He’d listen to the lyrics and read them on the album cover and think about what they meant to him. However many hours later Melvin would go about his business ( eating, bathing, cleaning house and talking on the phone ). Well, Melvin called me last week and said “hey, I got something you should listen to. “What is it?” I asked. Melvin said, “I’m not sure what to make of it yet, I’ve only listened to it seven times so far but I’ll tell you it’s definitely not someone else’s idea of a Popular Audio Product ”. Melvin brought it by and made me promise to give it back to him soon, said he wasn’t done with it yet and wanted to know after listening if I could make any sense of this thing.

Dear Melvin,
I’ve listened to Dennis Freese’s album “The Perilous Escape of Straggler Lemming”. Except for the title it makes perfect sense to me. It’s an anthology of twenty five years of music composition performed by at least ten different bands. Freese wears his heart on his sleeve with the tracks that give tribute to his wife and daughter, John Lennon, and the people who made the civil rights movement possible. The instrumentals “Jumping to Contusions”, “The Dance of Anger and Reconciliation” and “The Rebirth of Walter Midi” prove that you don’t need lyrics to dig into the emotions of the human psyche.. The wide variety of styles, texture and ideas contained in the eighteen tracks on this album would challenge those who are used to listening to Popular Audio Product but if they where to give “The Perilous Escape of Straggler Lemming” a listen they might conclude that the horizons of music are where ever the listener draws the line.

Melvin, thanks for the heads up.